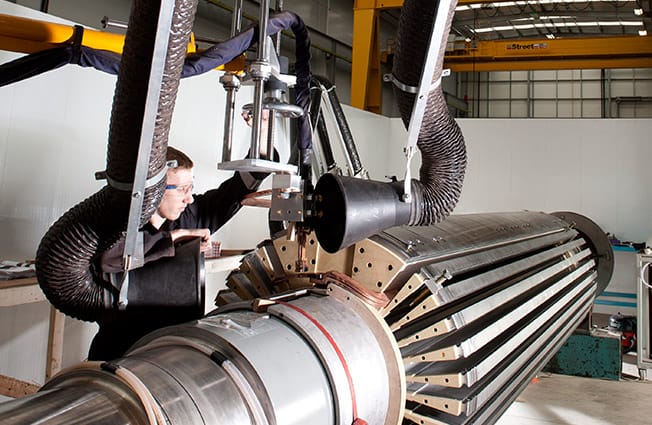 TAQA Global have become the largest independent power producer in the Middle East and North Africa with the Power & Water business representing approximately 55% of their revenue. Their power generation operations are based in the Middle East (United Arab Emirates, Oman, and Saudi Arabia), North and West Africa (Morocco and Ghana), India and the United States. The TAQA Takoradi Power Plant is a thermal power station located in Aboadze, East of Sekondi-Takoradi, Ghana and consists of 2 x GE Frame 9E and 1 x steam turbine with an output of 330MW.

Over 3 years ago one of the generators experienced a rotor earth fault and was repaired. However more recently, the rotor failed and a spare rotor was fitted to allow the station to continue operating. The rotor suffered a double earth fault and as a result of this incident severe arcing damage was found in every slot along the wedge dovetails and on the retaining rings. Two deep excavations (250mm axially and 300mm axially) were found within two of the rotor forging slots where material had vapourised at the site of the earth faults. In addition, more than 10% of the copper winding was melted and distorted.

The rotor was originally manufactured by a key competitor who undertook a damage assessment at their factory. At the same time, TAQA were developing relationships with Quartzelec who were asked to quote for the repair and refurbishment of the rotor. After the proposal and all information was considered, Quartzelec were awarded the contract to repair and rewind the rotor on the T240-370, 155,000kVA Generator.

The rotor components were transported to the Rugby workshop where initial inspections were carried out. In order to salvage the forging a weld repair of the two effected slots was carried out and followed by replication tests. In addition, arcing damage along the slot dovetail was machined off increasing the dovetail dimensions. A new set of the retaining rings, snap rings and wider wedges were procured. The rotor was rewound using about 80% of the old copper and new design of insulation system. New endwinding packing blocks were designed, manufactured and fitted. In order to confirm mechanical integrity of the forging and new components a set of NDT tests and 120% overspeed test were performed.  Finally, final electrical and mechanical tests were conducted before the rotor was suitably packed and to be swapped with an in service rotor in February 2013.

In addition to this contract, Quartzelec are currently refurbishing a failed exciter for TAQA. Quartzelec were also invited to Abu Dhabi to present to all TAQA plant managers on the works completed at Takoradi and additional services that Quartzelec could provide. We can confidently say that we were the more cost effective option than our key competitor and that we have proved ourselves technically, albeit that we were not the OEM of the generator.