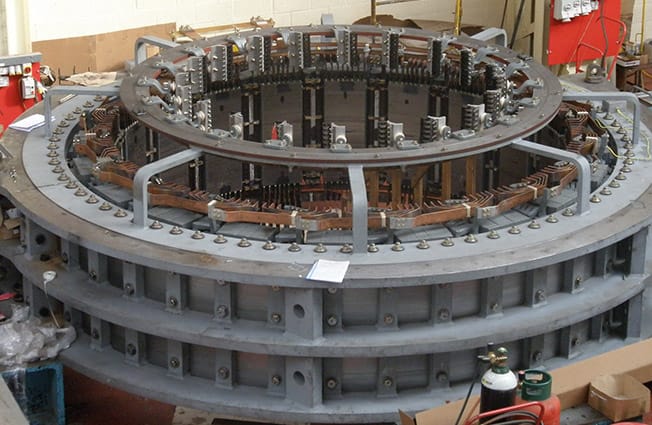 Xstrata Mine, formerly called Mount Isa Mines (MIM) is one of the most productive single mines in world history, based on combined production of lead, silver, copper and zinc. Mount Isa Mines (Xstrata 100%) operates two separate mining and processing streams, copper and zinc-lead-silver. The copper operations include two underground copper mines from which 6.2 million tonnes of ore is mined per annum; a concentrator with 7.2 million tonnes per annum capacity; and a copper smelter.

The existing Winder Motor on the U62 shaft has been in operation since 1972, bringing copper ore to the surface from the mine face more than 1,500m below ground and is one of the main sources of revenue for the mine. Due to the strategic and financial importance of the motor to the mine, the customer had become increasingly concerned about the age and its future reliability.

Quartzelec was engaged in early 2007 to undertake a full inspection of the motor and to provide a fully-costed solution to provide a further 25 years of reliable operation. Results from the inspection recommended that the motor could either be rewound or replaced. Due to difficulties in engineering a suitable outage of sufficient length to facilitate the rewind, Xstrata chose to proceed with the replacement motor.

Parameters specified by Xstrata was to keep the original field winding design such that the existing field winding spares held in stores could be used in the event of an emergency, it had to be uprated by a minimum of 10% above the existing motor rating and the motor had to have exactly the same footprint as the original.

The replacement motor was a horizontally mounted, shunt compensated D.C. machine, frame size DLC144/75, rated at 6750 kW, 1000 V d.c., 7220 A and 54 rev/min. The motor comprised a laminated magnet frame, armature, commutator and brushgear and was cooled by forced ventilation from an external supply. Prior to delivery, the motor was fully tested by our experienced engineers and in addition, the customer witnessed simulated full load rotational testing of the motor which was a major success factor.

As a result, Quartzelec were not only able to provide a motor with an identical footprint and field configuration as the original but were also able to increase the rating of the motor from 5.6MW to 6.75MW, which was an increase in excess of 20%. Competitors would not have been able to guarantee this uprate as they would not have had access to the original designs and drawings. In addition, they would not have been able to guarantee the full interchangeability of the motor and spare windings.

Based on this, the motor was approved and accepted by the customer.