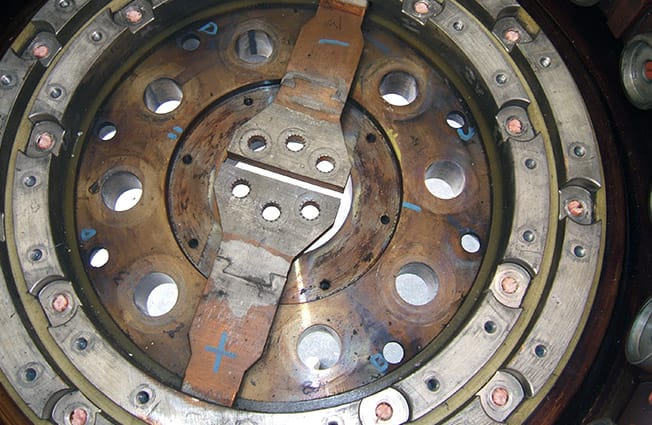 Petronas Gas Berhad are involved in gas processing and gas transmission. Natural gas from the offshore fields of Terengganu is processed before being piped into the pipeline network, delivering gas to customers in the power, industrial and commercial sectors throughout Peninsular and East Malaysia. The company has recently evolved to include the generation of electricity and have developed a 300 MW gas power plant in Kimanis to meet the growing demand for electricity in the state of Sabah.

Quartzelec had been chosen to investigate and repair a major failure to one of their nine similar bearingless rotating diode exciters. Investigation indicated that one of the flexible connections to the rotor up-shaft leads had failed, most likely due to the connection dovetail joint failing from tin migration within the soldered joint. Quartzelec recommended and Petronas concurred that all the exciters should be modified to avoid such failure.

The connections were designed and manufactured at the Rugby workshop along with a fitting kit and shipped to site for Quartzelec engineers to install.

Over 50% of the eight exciter hubs modified showed clear signs of tin migration and cracking to the soldered dovetail joints of the connection leads. All of the leads were failing / would have failed leading to costly forced generator downtime and damage to the exciters. Quartzelec supplied a solution to remove the certain failures in a planned and relatively inexpensive manner.