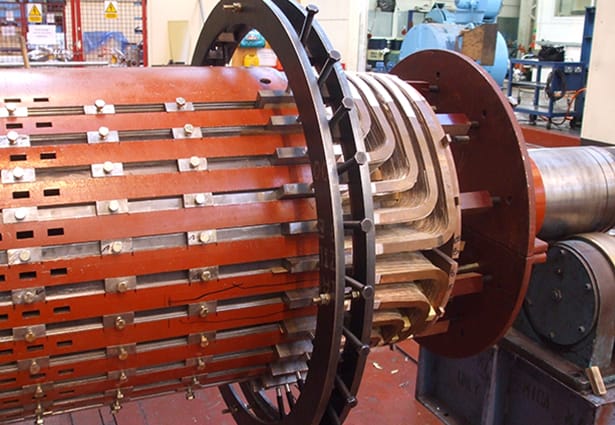 ADGAS is a gas liquefaction company based in Abu Dhabi. For the past four decades, ADGAS has been the regional pioneer in LNG, LPG and natural gases production. Das Island is 160km from the Abu Dhabi coastline and is the core operational gas liquefaction plant, consisting of three trains that process an average of 8 million tons of gases per year.

The LG2 generator is a Medeshia 2 pole 22MW driven by a steam turbine. The shaft system had been subject to an over-speed event in excess of 5000 rpm following a failure of the turbine stop valves. This resulted in a failure of the exciter banding and the coupling bolts that join the exciter to the main rotor; resulting in catastrophic damage to the exciter as well as excessive centrifugal loads in the rotor components; notably the retaining rings, wedges and rotor slot profile.

Quartzelec were awarded the contract to refurbish the generator following acceptance of Quartzelec’s stress analysis that demonstrated that the main rotor was viable for use. The contract scope included rewind of main rotor, including new retaining rings, insulation liners and replacement of the winding packing. Quartzelec were also contracted to supply a new exciter electrically identical to the original but to reduce lead times by maximising the use of modern engineering design techniques, including the use of 3D design modelling and FEA studies. The exciter was to be packed on a new bedplate that would mount on the original foundation points.

The bearing, rectifier, exciter and PMG were sourced externally whilst Quartzelec designed the new exciter rotor, bedplate and covers. After assembly the exciter was load tested to prove its electrical and mechanical performance. The rotor was re-wound at the UAE Quartzelec workshop before being moved to Rugby for final installation of the retaining rings and assembly of the exciter onto the rotor before being high speed balanced and overspeed tested. The exciter and the rotor were then packed and shipped to site where Quartzelec also managed the site installation and final commission of the LG2 generator.

The project was the first to fully utilise the new 3D design system. It was used for the FEA analysis to help first win the contract, also to maximise the design optimisation to reduce lead times and to give complete confidence in the design, including the critical site assembly on the remote Das Island.