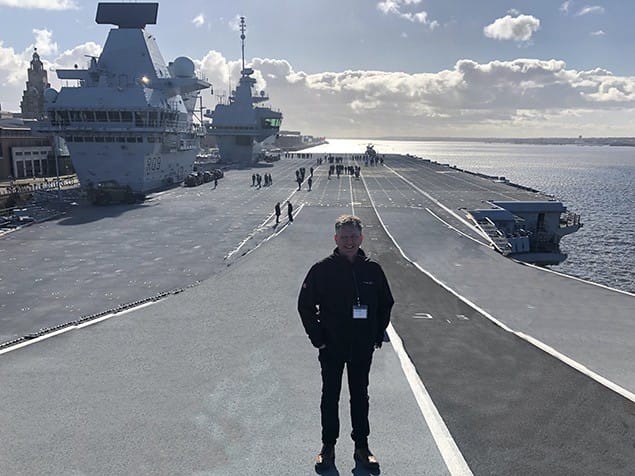 The first Monday in March 2020 saw members of the United Kingdom Naval Engineering Science & Technology (UKNEST) Forum join teams from the Royal Navy on board HMS Prince of Wales for a day celebrating Engineering Excellence in the UK.

TS Metals is an important and integral part of the Quartzelec Group, a leading independent engineering service provider with an ever-extending international reach and an annual turnover in excess of £74m. As a main supplier to General Electric Power Conversion, a key UKNEST member, it was honoured to be invited to attend the auspicious event as one of the many businesses from across the UK that supports various Royal Navy projects.

Ian Addison (Business Unit Manager) and Kathy Best (Business Development Manager) from TS Metals were on-board the Royal Navy’s new carrier ship which was docked in Liverpool as part of a programme to acknowledge the huge national endeavour that went into building these new ships by the hundreds of companies from across the country that are part of the build, supply and support chain. For almost 20 years TS Metals has supported GE Power Conversion by supplying many essential components for the Royal Navy Fleet which includes the Shaft & Arms plus Terminal Boxes for the Type 45 destroyers and the new Type 26 frigates, as well as undertaking other critical electrical systems work and direct support for other ships.

“It was a privilege to be invited onboard this the most sophisticated warship in the Royal Navy and see first‑hand the electrical systems that are at its heart,” stated Ian Addison who was in awe of its sheer size and power of the vessel. “TS Metals have worked on a number of different projects for the Royal Navy and ships from other nations over recent years.”

Captain John Bonnar, the Royal Navy’s Deputy Assistant Chief of Staff for Engineering Support, which organised the event also commented: “We were thrilled to invite so many young engineers of the future on board the ship to meet with the UK’s best and brightest who helped build these carriers, As the Royal Navy moves towards putting carrier strike operations at the heart of what we do, these engineers will see the results of their hard work helping keep Britain safe for years to come.”

He continued: “The construction of HMS Prince of Wales and her sister ship HMS Queen Elizabeth was one of the most impressive engineering endeavours the Royal Navy has ever seen. Thousands of engineers from across the country were involved in building them, and HMS Prince of Wales’ visit to Liverpool was a great opportunity to recognise their efforts.”